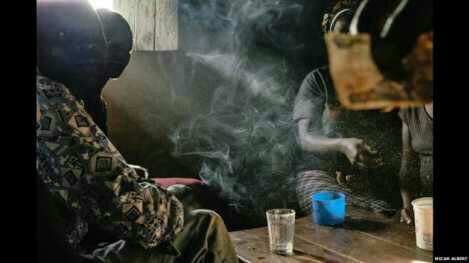 There has been a cry from women all over Africa. A cry that voiced the real concerns about men’s place in society.

Traditionally, the spoken African laws placed men as the head of homes. That men should be the sole protectors and providers of their homesteads. This has changed for the vice versa is now true. Women have taken over.

Recently on TV, i was listening to a discussion on women ‘washing’ their spouses feet as a sign of love and submission and this baffled me.

How can a woman give and show love to a man who does not do the same? Is it possible to give what you do not have?

In African settings, the wholeness of a family lies solely on the woman. If the man files for divorce, then it is the woman’s fault. The society will point fingers and say that she did not take care of her man. The truth is, a relationship is built on two people, not one.

Presently, women have risen to higher ranks than just being housewives or maids. Due to the high number of childish men, single mother homes are hitting the family tree billboards abnormally. More and more men are escaping their responsibilities as fathers.

Mothers are forced to take over the mantle of the man and be the provider, the protector and advisor. They are inclined to bow down to the pressure of raising the next generation alone ,simultaneously facing ridicule from in-laws and society.

For women in dysfunctional marriages starring a jobless partner, similar observations are made. Apart from spouses who are severely handicapped or disabled, a man who is medically fit and capable of carrying out his normal duties as a human has no reason to be idle.

Idle men in Africa are popular consumers of chang’aa, miraa and bhang. Women of Kiambu, Kenya have complained of their men being rendered infertile by the local brew called chang’aa.

Chang’aa has also been blamed for making men inactive under the sheets. The young Kiambu men are made blind by the illicit brew made up of 60% methanol, others are unfortunate enough to meet their maker on the same day.

Real men accept rejection and move on. However, traditional laws dictate that women have no say.

If a man wants you and is lucky to be your first suitor, you have no rights to say no unless your parent (the father) disapproves your courtship.

There have been cases of men brutally assaulting women when rejected. Cases of women being insulted, beaten, robbed, cyber bullied and stalked are reported frequently to the police.

Real men do not beat women no matter how huge the offense is. Real men treat their women right and in turn they get what they give. As it goes, you cant give love if you have never been loved.